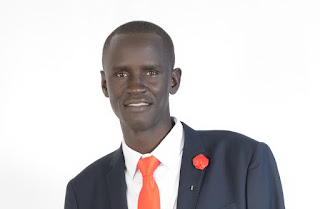 Francis Banychieng is a teacher by profession, youth mobilizer and an inspiring leader and peace building activist. He is trained in conflict resolution, leadership, project management and technology tools. He has a Bachelor’s degree in Education, specializing in English and Literature from the University of Bahr el Ghazal, one of the national Universities in South Sudan.
Francis has demonstrated his leadership skills at the university where he graduated. For example, he is the founder of the College of Education Students’ Association (CESA-UBG). He was also elected twice as the General Secretary of the university of Bahr el Ghazal Bible Society. He is also the founder of Graduate Union of the University of Bahr el Ghazal (GU-UBG).
At the community level, he was a program coordinator for the South Sudan Youth Society for Peaceful Co-existence (SSYSPC) in Wau state. He is the initiator of the YALI network South Sudan and also the initiator of Peace Revolution. Francis has also worked as a volunteer youth mobilizer for Sawa Shabab (Youth Together), peace-building radio dram in South Sudan. More recently, he was accepted to participate in a fellowship program at the United States Institute of Peace in Washington, DC. The Sudanese and South Sudanese Youth Leaders program at USIP offers a chance for Francis Banychieng to gain new skills and experience in conflict resolution during four months of study in the USA.
Francis’ interests include: youth and peace-building, conflict management, analysis and resolution. He strongly believes in empowering young men and women to take peace-building action, and he believes that such leadership is the core of a peaceful society.

The strength and gro... read more