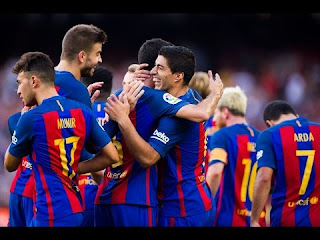 Like Barcelona FC life may give you certain heavy blows and convince you that you will not make it in that business, career or your entire life. The results of your present circumstances like PSG’s 4 nil win over Barcelona FC may convince people and even you that your future and success is totally impossible. One single and unforgetable failure in your career, business or life like the kind of failure Barcelona FC experienced in Paris gainst PSG should not and should never cause you to lose hope in yourself or your future. Losing a single battle does not mean you will not win the war. Am sure Barcelona FC players and fans ( including me) were questioning if they could cope with huge win that PSG had over them in Paris like, this team am sure due to some huge failures and set backs in our lives we have questioned ourselves and even gave up on yourself and on life. We have even refused to forgive ourselves from the mistakes that we did that caused the huge failure in our lives.

Every huge failure is always accompanied with painful experience but is just for a short period don’t and never allow that pain to be part of you for long, get over it, like FC Barcelona, let every failure help you to do better in the next match or in future, let every failure in Paris aid you to avoid similar mistakes in camp Nou Barcelona. Like the failure in Paris did to Barcelona FC, let every failure open new possiblities of scoring 6 goals gainst all odds and leave a lasting legacy. Stop worrying about your past failures and look forward to the future opportunities like Barcelona FC looked up the next match against PSG with determination, hope, focus and the huge desire to win. They made up their minds before the match to contribute their level best despite the huge loses in Paris. Successful people don’t complain and mourn over past failures but look ahead to new opportunities with an open mind and the desire to win.

“Defeat is not the worst of failures. Not to have tried is the true failure” George Edward

About the Author
Javnyuy Joybert is a proud FC Barcelona fan, a Social Entrepreneur, Empowerment Coach, Public Speaker and a dynamic, prolific and strategic Entrepreneurship/Business Management Trainer/consultant and a personal efficiency strategist. He is focused, question asker, answer seeker, problem solver and purposeful young African. He is the CEO of CELBMD Africa (www.celbmdafrica.org), Head of Njorku Career Centers (www.njorku.com), Country Director Consultant for C-Life (www.myclife.org), COO of Most Influential Young Cameroonians Initiative, YALI RLC Fellow and Consultant with several community base organizations, NGOs and SMEs across Africa. He has been nominated and has worn several local and international awards. He is the author of How to Confront the Limits; he has lectured Business Management courses in two private universities in Cameroon for 5 years (2012-2016) and has been featured on numerous publications across the world

Throw Away That Deg... read more

Preparing For The Interview: For Young Africans

So many job seekers ... read more

Do My Essay for Me: the Ultimate Convenience!