admin2017-01-28T06:11:00+00:00
“I’m not your servant” Museveni tells Ugandans
“I am just a freedom fighter fighting for myself and [my] beliefs. I am not an employee . If anybody thinks he gave me a job, he is deceiving himself. I am just a freedom fighter whom you thought would help you also”
Uganda’s President Yoweri Museveni has told Ugandans
Mr. President, you like many of our African Presidents, during elections they act and behave like attractive servant leaders and when they get the votes and are in office they act and behave like thieves and claim to be political fighters as you clearly stated in your comments. When African Presidents through their voices and actions start declaring that they are not servant leaders but political fighters and money mongers, thieves, embezzlers the future of Africa seem bleak. Mr. President, Many nations in Africa right now are in an uproar, violence, economically down because you African Presidents (rulers not leaders) have refused to be servant leaders with character, integrity and skill. Instead of you Mr. President and your fellow colleagues in other countries to be role models to young leaders serving your countries with high integrity, excellence, and skill, instead you have beyond reasonable doubts proven to be world class thieves who think only of themselves and don’t bother about the kind of legacy and inheritance you leave for the future generations of Africa.
President Museveni, your excellency you will agree with me that the African Continent is at a point in time where they need competencies such as servant leaders, creativity, problem solving, initiative, and transformational leadership capabilities, when you now stand and publicly declare that you are not a servant to Ugandans what hope are you giving to them Sir? Your Excellency today servant leadership is rare in Africa many of you are rulers not leaders and your actions have led to the frustration of millions of young Africans because they don’t see the future of Africa because you have placed your interests above all else.
Your Excellency am sorry to say but you and your fellow presidents of other countries in Africa have failed to deliver but i assure you sir, my generation is full of unique and servant leaders who are selfless, humble, who develop empathy and foresight. Leaders who are deeply committed to identifying and fulfilling the needs of all those they serve and recognize the invaluable contributions of every member of society and walk in the shoes of those they lead.
Your Excellency your generation destroyed Africa but my Generation is building Africa for the Glory of God.
About Javnyuy Joybert 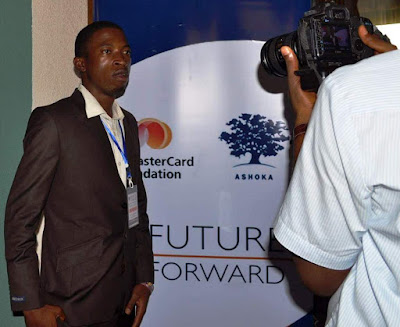 Javnyuy Joybert is a Social Entrepreneur, Empowerment Coach, Public Speaker and a dynamic, prolific and strategic Entrepreneurship/Business Management Trainer/consultant reputable across Africa and a personal efficiency strategist. He is focused, question asker, answer seeker, problem solver and purposeful young African. He is the Founder/CEO of The Center for Entrepreneurship, Leadership and Business Management Development (CELBMD) Africa – The Pan African Professional Center (www.celbmdafrica.org), Head of Njorku Career Centers (www.njorku.com), Country Director Consultant for C-Life (www.myclife.org), COO of Most Influential Young Cameroonians Initiative and YALI RLC Fellow 2016. He has been nominated and has worn several local and international awards. He is the author of How to Confront the Limits; he has lectured Business Management courses in two private universities in Cameroon for 5 years (2012-2016) and has been featured on numerous publications across the world

Knock Down But Not Defeated! By Adedayo Olabamiji

Joseph was given a ... read more

Key management aspects that kill most SMEs in Africa By

3 “Es” EVERY CREATIVE ENTREEPRENEUR MUST MASTER FOR BUSINESS GROWTH.

Whispered Come up with My Essay Testimonials Industry secrets

The Most Recognized ... read more

How to Get Started off with Publish down an Essay On-line?

What Do My Essay Onl... read more